Chrissy Brodish submitted an entry for our Blog Contest.

If you want to  enter our largest prize contest ever, go to Summer Blog Contest.

Below is his blog which can also be found at Brodish Blog.

God has been using this verse a lot in my life lately.  I keep trying to figure things out, things that seem so complicated to me and He just says- “Wait, Be Still, and wait…”  But that really is not an easy thing to do when you have 5 children and another little one that you are busy with.  I want to Be still, I want to sit at His feet and listen intently to all that He has to say to me. But I get the busy’s going and can’t seem to stop.

I am often reminded of the story of Martha and Mary and how Jesus used that moment as a teachable moment for Martha.  She just didn’t get it.  Things needed to be done, and she really wanted help doing them.  To her the importance was to get the meal prepared and things done in the right way.
But to Mary, being still at Jesus’ feet was the better choice.

38 As Jesus and his disciples were on their way, he came to a village where a woman named Martha opened her home to him. 39 She had a sister called Mary, who sat at the Lord’s feet listening to what he said. 40 But Martha was distracted by all the preparations that had to be made. She came to him and asked, “Lord, don’t you care that my sister has left me to do the work by myself? Tell her to help me!”

41 “Martha, Martha,” the Lord answered, “you are worried and upset about many things, 42 but few things are needed—or indeed only one.[a] Mary has chosen what is better, and it will not be taken away from her.”

That’s the key… “Few things are needed…Indeed only one is”- Him.  But as Martha we get so “distracted” with the things of this world that we keep putting the Lord off.

A recent example of this in my life, was when I was helping to lead a camp at Refreshing Mountain (www.refreshingmountain.com) this past summer, for our CE Summer Assembly Conference.  The theme for the week was Surrendering to Him.  I think God not only wanted the teens to understand what that fully meant but me as well.  It was mid-week and our speaker had already felt earlier in the day the Lord was speaking to him about switching up what He was going to talk about that evening.  It would still be about surrender but in a different perspective than what He had originally planned.  As he spoke the lights flickered a few times, and then poof they were gone.  We lost all power.  No lights, no audio visual help, nothing.  This was actually a good thing, for many of us were probably distracted with other things and this sudden power outage got all of our attention.  I was able to give our speaker my phone so he had a flashlight to follow along in his notes.  But the students listened intently.  I think God had all of our attention, including me.  Just prior to that, I had been distracted with the printer in trying to print some items off for the speaker, and it just wouldn’t work.  God shut that down too.  He knew what we needed for that evening and what we didn’t.  Just as the speaker was wrapping up someone from the camp came down to our meeting room and was able to get us on the generator.  We had a different plan in mind, originally for the evening.  But God had something different all together in mind.  We stayed in our meeting room after the session and enjoyed playing some really fun games, that we may never had played as a whole group.  It was a really neat time of connecting with all of the students together as one.

Our second example of this was on our last evening, we had “planned” in our schedule a campfire.  At the campfire, the students were going to be challenged to throw in the fire masks that they had made earlier that day.  On the masks were written different areas of their life in which they were struggling to surrender to God completely.  Just as we were dismissing the students to go to their rooms and prepare for the campfire it began to pour.  So… we came up with a plan B- or as I would like to think, God said, “Okay this is how it’s going to be…”.  We gathered in a circle in our meeting room with a box in the middle of the room.  We placed a couple of glow sticks in the box to symbolize the fire and then we allowed opportunities for the students to share, if they would like and then tear up their mask and throw it in the box.  Some students just tore it up and threw it away, others shared all that God was stirring withing them.  This “campfire” went on for over 2 hours.  It was such a moving time for many.  Students were bold and were embraced by God’s love and grace of others.  It was so awesome to see other students uplift one another in prayer and embrace them with grace and love.

I was also thankful for the opportunity that our group had to break up in to 3 small groups on Wednesday and do the Fun Team Building Activities, that the camp had prepared for us, to go along well with our theme for the week.  This really challenged them, to think, and work together as a team.  That every move they made would have an impact on another.  One of the challenges even helped them see how each one of us has a talent and a gift and how we can use those talents and gifts to help one another or try and manipulate others with our own “gifts”. They were challenged to work together to build each other up, by each one given 2 blocks of wood, all different shapes and sizes to form a tower of wood, as we should in the body of Christ.  This is a key in surrendering as well.  We need to often surrender our own needs or wants for the benefit of those around us. 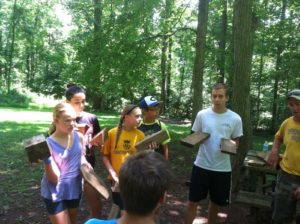 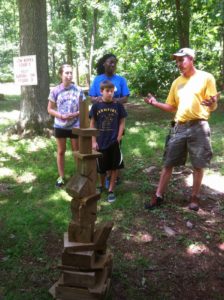 It all came together as the week went on, from beginning to end, for me.  This week wasn’t at all about me or what “I had planned”.  This was God’s week from start to finish and He not only wanted the students to see that, but me as well.  He was the one in charge, not me.  He wanted me to “Be Still and know that He is God.”  And as I stepped back and watched all that He was doing, I was in awe.  It was His moment to shine, His moment to “Be”  and to help all of those who were there to know who He is. The God of the Universe.  The one who still has control of the weather, and all of the things that surround us on a daily basis.

He also helped me see that I can’t get upset when things aren’t going as I may have had planned, because He already has it all figured out.  I just have to trust Him and all that He has and is going to do.

My challenge for you is wherever you are in life,  don’t forget to just “Be Still”  to allow Him, to be the God He was created to be.  He wants all of us and He wants us to want all of Him.  He is God, and He does have it all figured out, even when we think we do, we don’t.  Trust in Him and believe in the plan He has set before you.  Sometimes that may mean waiting awhile, a long while.  But be patient and think about how extremely patient He has been with you, with us.  But He is willing to wait because that’s the kind of God He is.  He loves us and wants us to just rest at His feet, just like Mary did that night.

Be- Just Be, not do, but Be.
Still- Wait on His leading
Know- He is there, He has not abandoned you, nor will He.
I Am- God said to Moses, “I am who I am. This is what you are to say to the Israelite’s: ‘Iam has sent me to you.’”  Exodus 3:14
God- He is and always will be God, the one who holds the master plan

Reflect and think about what this means to you… Are you being still?  Are you waiting at His feet?  are you allowing Him to be in the center, in full control of your life?

My prayer for you, is that you will desire to do that.  That you will want to know Him more intimately and realize what an incredible gift it truly is to sit at His feet and be in His presence.

We want to share some ways that you can build your team right in your own office!

Enter your email below and we’ll send you this resource developed by our own Team Building Team.